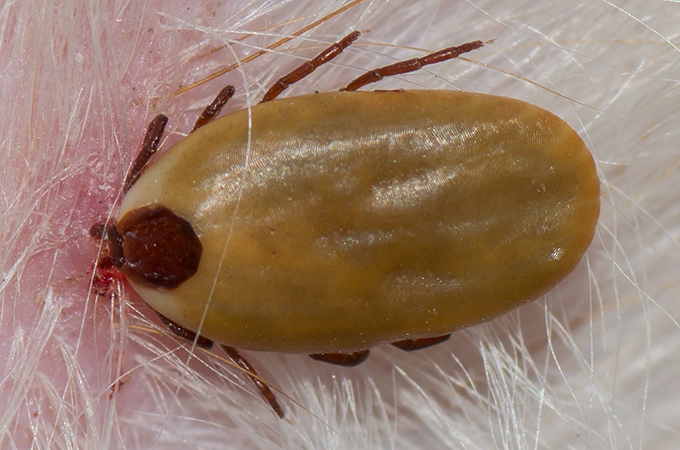 Brown dog ticks are a flat, reddish brown ectoparasitic arachnid, which means they are an external parasite that is classified as an arachnid, not an insect.  In the nymph and adult stage these ticks have 8 legs, but in their larvae stage, they only have 6.  Adults can range in size from 1/8”, as an un-engorged size, up to ½” as an engorged size.

When are brown dog ticks most active?

In South Florida brown dog ticks are a year-round indoor and outdoor threat.

Brown dog ticks prefer to feed on dogs and often adults attach to dog’s ears and between their toes.  They are also attracted to other mammals, and rodents.  They lay their eggs in secluded and hidden places such as in cracks and crevices and under furniture or rugs.

Where are you likely to find brown dog ticks?

Brown dog ticks are a worldwide issue, but are more prevalent in warmer climates and are distributed throughout South Florida.  These parasites prefer to feed on dogs and are usually found in houses and kennels.  But if their preferred host is unavailable, brown dog ticks will feed on any mammal, including humans. The brown dog tick is the only tick to complete its life cycle in a home.

Ticks are not destructive of property, but their mere presence or infestation can de-value property quickly.  Brown dog ticks are considered dangerous because they have been identified as being a vehicle for spreading such diseases as Rocky Mountain spotted fever in the southwestern United States, as well as along the Mexican border to humans.  Click here for information from the Center for Disease Control (CDC) regarding Rocky Mountain Fever.

Brown dog ticks also spread diseases to dogs, such as canine ehrlichiosis (Ehrlichia canis) and canine babesis (Babesia canis).  Both of these canine diseases have been confirmed in Florida.  Make an appointment with the veterinarian If your dog is experiencing any of these symptoms; lameness, fever, anorexia or anemia, as these could be associated with these two canine diseases.