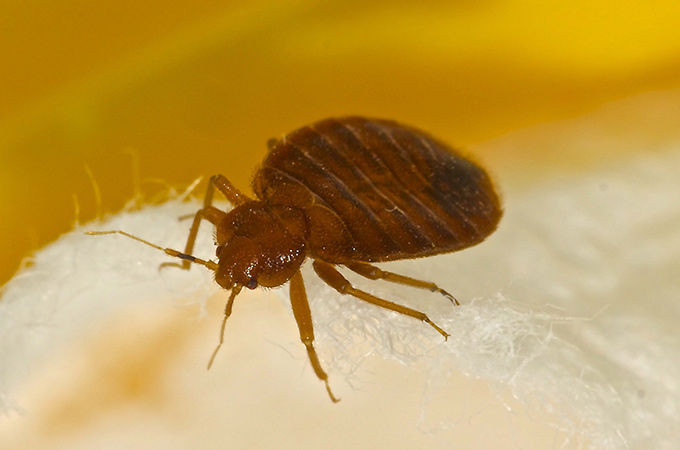 An adult bed bug is the size of an apple seed or 3/16 to 1/4 of an inch long.  They are brown and usually flat unless they’ve fed then they become balloon-like.  Bed bug nymphs are smaller and whitish-yellow (almost translucent) in color.  Nymphs are commonly mistaken for book louse nymphs. Both are light colored but the bed bug nymph has a less elongated body. It doesn’t look like it has a neck, whereas the book louse does.  Bed bug eggs are tiny (the size of a pinhead) and pearl white in color.

When are bed bugs most active?

Bed bug activity is not influenced by seasonal environmental factors like other insects.  They are active year-round and found everywhere in the United States. Bed bugs are especially prominent in Florida as it is a vacation destination for tourists.

A bed bug’s favorite host is a sleeping human. They do not feed on the host itself, but on the blood they suck from the host. A common misconception is that bed bugs are the result of dirt or filth. They are an equal-opportunity pest, normally transported in luggage or on clothing, where they quickly invade hotel rooms and mattresses.

Bed bug bites are often slightly swollen red areas that may itch or cause irritation, much like mosquito bites and flea bites.  Bed bug bites may be random or appear in a straight line.  It’s important to note that you may not have any redness or symptoms when a bed bug bites but you could also experience secondary skin infections from excessive scratching at the bite location.

What are the signs of a bed bug infestation?

Signs of a bed bug infestation include small blood stains on sheets and mattresses and similar stains at other locations that could be entrances to hiding places. Bed bugs are exceptional at hiding and may be found in popcorn ceilings, the rims of mattresses, under carpets and other small, dark places.  It is a misconception that bed bug activity is confined to beds.  Other furniture like couches and chairs may become infested as well.

Are bed bugs dangerous or destructive?

After repeated bed bug bites, the human body will produce antibodies that will cause the area to itch like a mosquito bite. People who suffer numerous bites can also develop a sensitivity syndrome, which can cause nervousness, lethargy and a pale pallor.  Currently, bed bugs are not known carriers of disease and are not destructive to property. Though, Bed bug infestations can result in significant stress and economic loss.

What are tropical bed bugs?

First discovered in Florida in the 1930’s, tropical bed bugs have not been seen since the 1940’s until recently. This strain of bed bug prefers climates that are tropical or sub-tropical, are typically found in Asia and South America, and are thought to have entered Florida via local ports such as Port Canaveral.  Like regular bed bugs, they are skillful travelers however it is believed that they reproduce much faster and more frequently.   What impact they’ll have in Florida remains to be seen but currently it is thought that bed bug heat treatments used on regular bed bugs will be effective against this type.

How do you get rid of bed bugs?

At Nozzle Nolen, we know bed bugs can’t stand the heat.  That’s why we use highly effective bed bug heat treatments to exterminate these biting insects from homes and businesses in our Florida service area.  We also offer structural fumigation and conventional bed bug treatments.  If you’re concerned about a bed bug problem, we’d be happy to evaluate your infestation and develop a bed bug control plan that suits your situation and budget.